Originally featured in the Elizabethtown Merchandiser. By Leah Sintic. Pictures by Cheri Sine 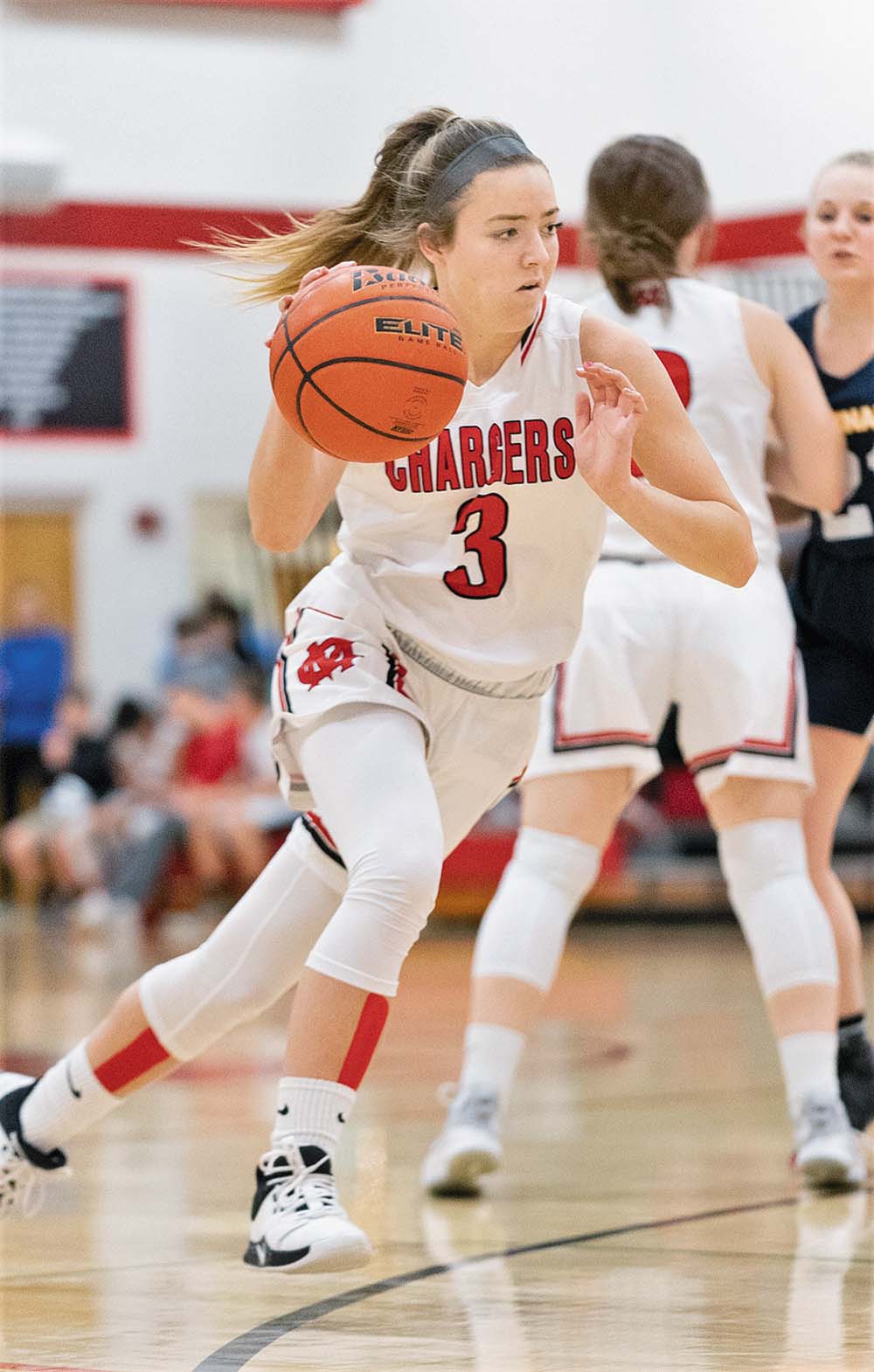 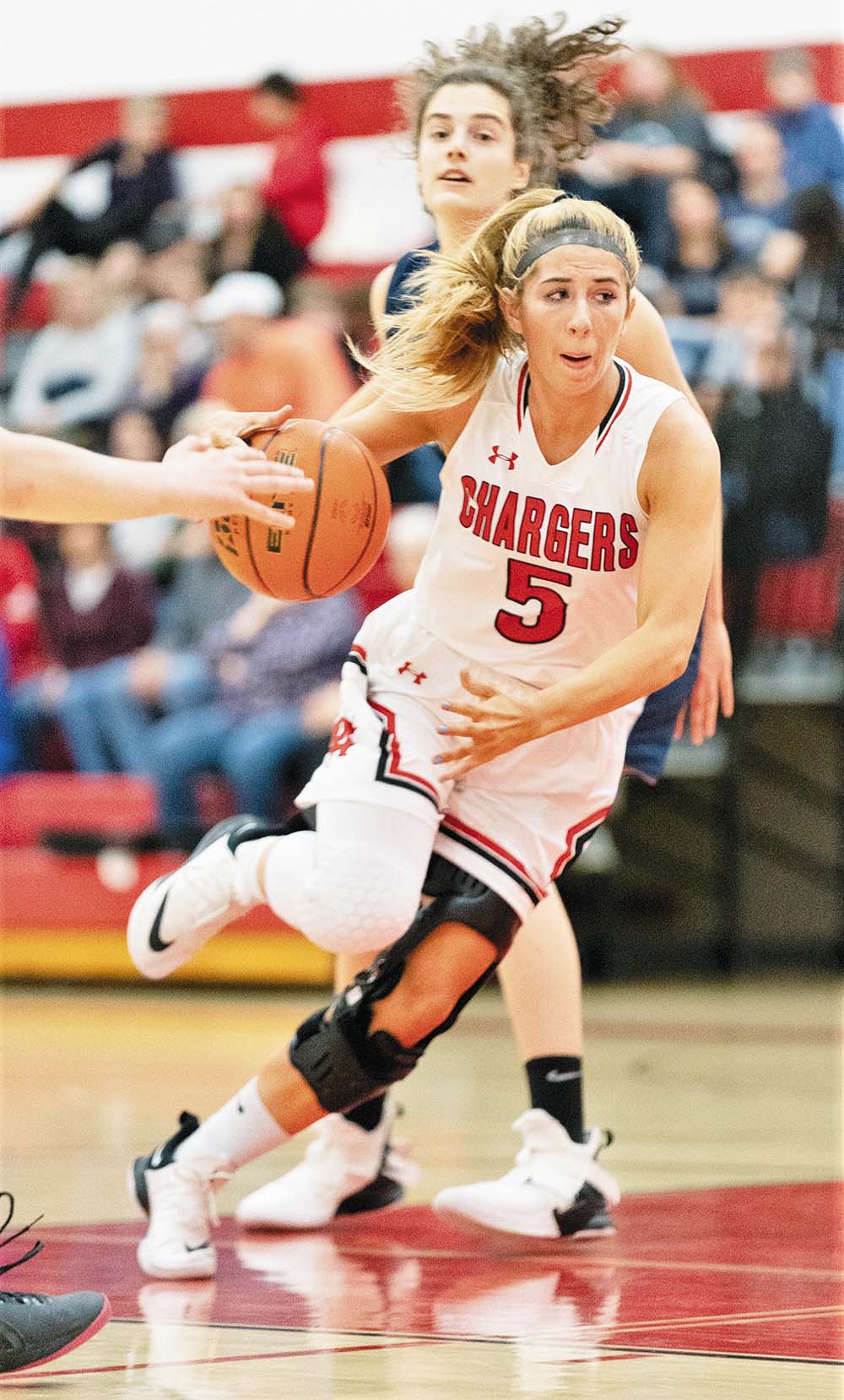 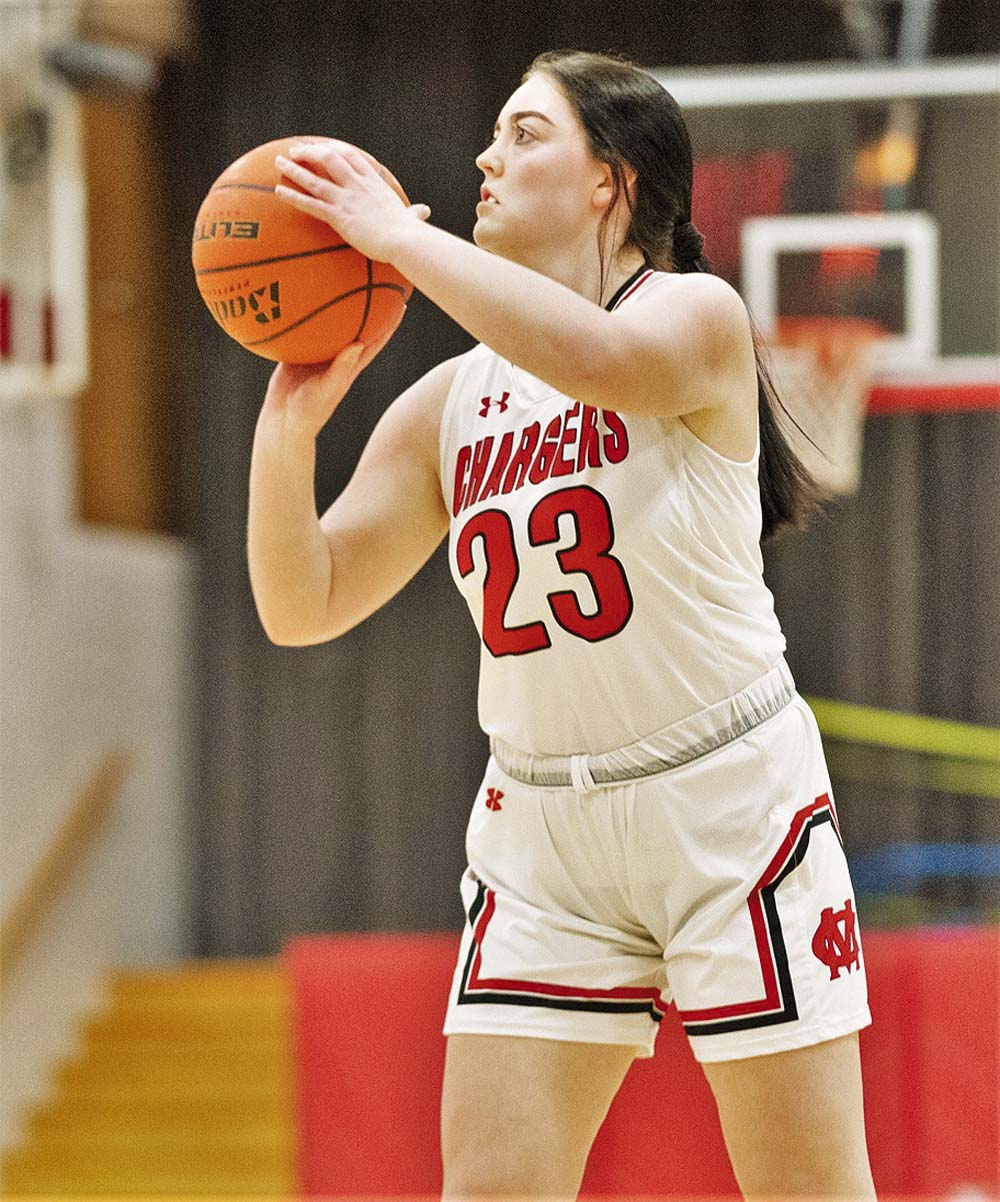 Three games last week brought in an additional pair of wins and one loss, wrapping up the Lady Chargers’ regular season at 16-6, and setting the groundwork for their playoff berth this week.

Friday night, the MC club succumbed to a slim, 34-32 loss to Millersburg in the final game of the regular season.

Mount Calvary held a one-point lead, 18-17, at the half, and not much changed before the fourth quarter with MC still clinging to a 23-22 advantage, but the Indians were able to outscore the Chargers 12-9 in the final period to go ahead by two just before the final buzzer.

Last Thursday, the Lady Chargers headed to New Covenant Christian for their final conference matchup of the regular season, another low-scoring affair, but got the job done in a 35-25 triumph.

The Falcons briefly held the lead, 8-5, after the completion of the first period, but three solid Charger quarters followed, sparked by 15 points from Kara Locker to turn the tide in Mount Calvary’s favor.

The victory marked the 11th conference success for the squad, having only dropped one CCAC contest all season, a mid-January loss to Christian School of York.

Two days prior, the Chargers took down Covenant Christian by a 49-23 differential.

Witmer pulled down another nine rebounds, and Locker chipped in 11 points for the MC cause.

“Overall we’re playing well,” evaluated head coach Phil Ferrari. “We still have some things we are trying to correct heading into playoffs, but our main focus is getting everyone healthy and on the same page so we can give our best effort through playoffs.”

Wrapping up the regular season schedule with another two wins last week, the MC boys’ team shows no indication of slowing down, finalizing their CCAC record with a 12-0 sweep, and achieving the 20th win benchmark to give them an overall record of 20-2.

“While the number of wins does not always reflect the amount of success, we knew that 20 to 22 wins was within reach this year and that to do so meant improving our play each week,” noted head coach Kory Pruner. “We learned a lot during our two losses early in the year, and 20 wins is a huge accomplishment for our program.”

Thursday marked the final game of the regular season, but the Chargers were still giving their full effort, claiming the contest 93-23, and holding their opponents to 10 or fewer points in each quarter.

A grand total of 13 Charger athletes contributed points in the runaway win with Aidan Masters blazing the way, gathering a career high 35 points, cashing in on 21 of those points from three-point range. Rounding out his contributions, Masters also snatched up five steals and doled out six assists for a well-balanced performance.

Jack Hilsher netted nine points, all in the first half, to help the Chargers surge ahead, and freshman Reagan Mummau was a second half presence, putting in six of his eight total points in the final quarter.

Tuesday held the final regular season home game for Mount Calvary and produced an 83-48 triumph over the Covenant Christian Falcons.

This time Masters poured in a game-high 30 points, while Hilsher and Hunter Stewart supplied 15 and 14 respectively.

“We showed a lot of improvements in moving the ball against their zone, finding openings, and being patient,” explained Pruner.

That patience was demonstrated in the teams’ 16 assists, four of which were dished out by junior Damian Rutt.

Hilsher’s five steals coupled with another four from Harrison Crick, sparked the defensive intensity and prevented the Falcons from gaining their offensive footing.

Despite the large margin by which the Chargers claimed their final showdowns, there is plenty to work on while preparing for tougher playoff competition.

“We limited our turnovers and shot well from inside, which are two things we are emphasizing as we prepare for post-season play,” added Pruner.

Securing the top CCAC West seed, the team earns a first-round bye and anticipates hosting the victor of an early week clash between Lancaster County Christian and West Shore Christian in the semifinal round on to be held on Thursday, with the championship game being played on Saturday, February 15th at Lancaster Bible College.

Looking beyond conference playoffs, the team also holds PIAA District III aspirations and are currently clinging to the top seed in that post-season bracket as well.

“We know that we need to focus on the game and the opponent at hand each night and take care of the things we can control,” emphasized Pruner.